Frijns forced to withdraw from Nurburgring 24 with 'flu-like infection'

Audi driver Robin Frijns has been forced to withdraw from this weekend's Nurburgring 24 Hours due to what the German manufacturer has called a 'flu-like infection'.

DTM and Formula E regular Frijns was due to contest the German endurance classic for the Car Collection Motorsport team, sharing the #3 Audi R8 LMS with Mirko Bortolotti, Christopher Haase and Markus Winkelhock.

However, ahead of Friday's third qualifying session, Audi released a brief statement saying that Frijns would take no further part in the weekend.

It added that the Dutchman was tested for COVID-19 and returned a negative result.

The news comes after Porsche withdrew its Manthey Racing-run #911 car and a number of drivers that competed at Le Mans after positive COVID-19 tests were recorded.

The #3 Audi was sixth-fastest in Thursday's first qualifying session, eight seconds shy of the pace-setting Konrad Lamborghini Huracan GT3 driven by Marco Mapelli, but slipped to eighth after the night session.

Mapelli managed an 8m11.428s best lap aboard the car he shares with Axcil Jefferies, Franck Perera and Michele di Martino, just half a second slower than the 2019 pole time.

PLUS: How a DTM failure became an unlikely Nurburgring conqueror

However, the fastest Audi entry on Thursday was Phoenix's second car, the #5 entry (below) shared by Michele Beretta, Jules Gounon, Kim-Luis Schramm and Frank Stippler. In Gounon's hands, it set the second-fastest time, 3.915s off the pace. 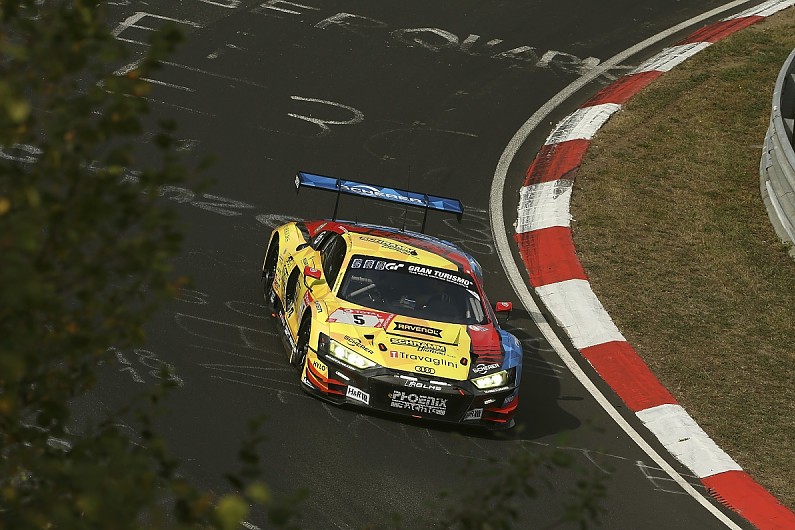 Behind Gounon, 2016 winner Maro Engel was third in the best of the Mercedes entries - the #4 Haupt Racing Team example he shares with Adam Christodoulou, Manuel Metzger and Luca Stolz - while Timo Bernhard made it four different manufacturers in as many positions in the #18 KCMG Porsche he shares with Earl Bamber, Jorg Bergmeister and Dennis Olsen.

BMW's efforts to end its 10-year wait for a victory at the Nurburgring 24 got off to a disappointing start, with the best-placed of the M6 contingent only tenth.

The #101 Walkenhorst machine of David Pittard, Mikkel Jensen, Christian Krognes and Jordan Pepper was 10.039s slower than Mapelli, with the #22 Schnitzer BMW down in 22nd position.