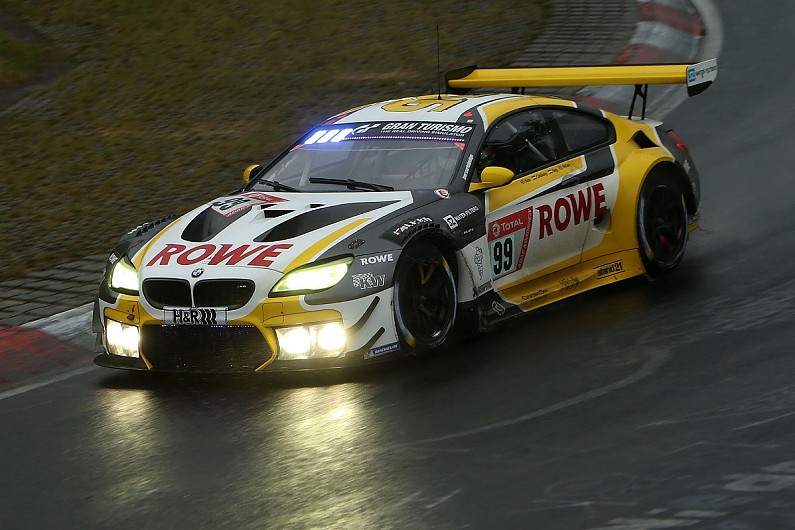 The trio’s BMW M6 overcame the #3 Car Collection Motorsport Audi R8 LMS driven by three-time winner Markus Winkelhock, Mirko Bortolotti and Christopher Haase after the latter stayed out one lap too long amid rain showers with 90 minutes to go.

The ROWE car eventually finished 15s ahead as Sims and Yelloly became only the fourth and fifth British drivers to win the event after Steve Soper (1987), Andy Priaulx (2005) and Adam Christodoulou (2016).

The race was red-flagged due to heavy rain on Saturday evening, shortly after the race-leading #4 Haupt Mercedes and #9 Getspeed Mercedes both crashed out.

After a nine-and-a-half-hour break, it restarted at 8am on Sunday morning and ROWE quickly moved into second behind the #3 Audi as the track dried.

Car Collection was the sole remnant of what had been an Audi 1-2-3 at the restart, with both the #1 Phoenix and the #29 Land entries losing ground under drying conditions and being further penalised for a pit stop infringement and non-respect of flag signals respectively.

When another rain shower hit the track with 90 minutes to go, ROWE promptly reacted by changing tires, but Haase lost 50 seconds by staying out for an extra tour on slick tyres.

Phoenix seemed set for third until Dries Vanthoor made contact with the barrier at Klostertal with 40 minutes to go and had to return to the pits, dropping the car he shared with Nico Muller, Frederic Vervisch and Frank Stippler down to fifth.

This promoted the #42 Schnitzer Motorsport BMW of Augusto Farfus, Martin Tomczyk, Jens Klingmann and Sheldon van der Linde to third, while the #98 ROWE BMW of Marco Wittmann, Tom Blomqvist and Philipp Eng – who had originally been entered in both ROWE BMWs – took fourth ahead of the Phoenix and Land Audis.

The best Porsche was only to be found in seventh position after a difficult race following the withdrawal of all the works drivers that represented the marque at Le Mans due to COVID-19 concerns.

The Frikadelli-entered #31 Porsche lost a possible podium position after Mathieu Jaminet was penalised for contact with Eng’s #98 BMW.

After qualifying on the front row, the challenge of the #26 octane126-entered Ferrari faded almost immediately. Jonathan Hirschi took a brief lead into the first lap, but the Dunlop-shot Ferrari tumbled down the order and was not classified.