Stephane Peterhansel says the Dakar Rally has become “kind of dangerous” in 2021 due to high average speeds witnessed in the deserts of Saudi Arabia.

After organiser ASO admitted that some stages in the inaugural Saudi-based Dakar event last year were “very fast”, a new route that is “80-90% new” compared to the previous edition was prepared for 2021 to address the issue.

A top speed limit was also introduced for the cars category, with competitors in the T1 (which includes Toyota, X-raid and Prodrive’s new BRX1 contender) and T2 classes restricted to 180km/h (112mph), and T3 and T4 participants not allowed to go past 130km/h (81mph).

However, 13-time Peterhansel believes the new regulations haven’t completely served the purpose as the average speeds have ended up being higher on Dakar’s second visit to Saudi Arabia. This, he believes, has made the rally-raid potentially dangerous due to greater risks of crashes and mistakes.

The X-raid driver’s comments follow a horrific crash for Hero rider CS Santosh, who had to be “resuscitated” by Husqvarna’s Paul Spierings after he fell unconscious in Wednesday’s Stage 4.

Santosh has since been placed into a medically-induced coma after being diagnosed with a traumatic head injury at the Saudi German Hospital in Riyadh, where he will undergo further scans on Thursday to determine the seriousness of his condition. 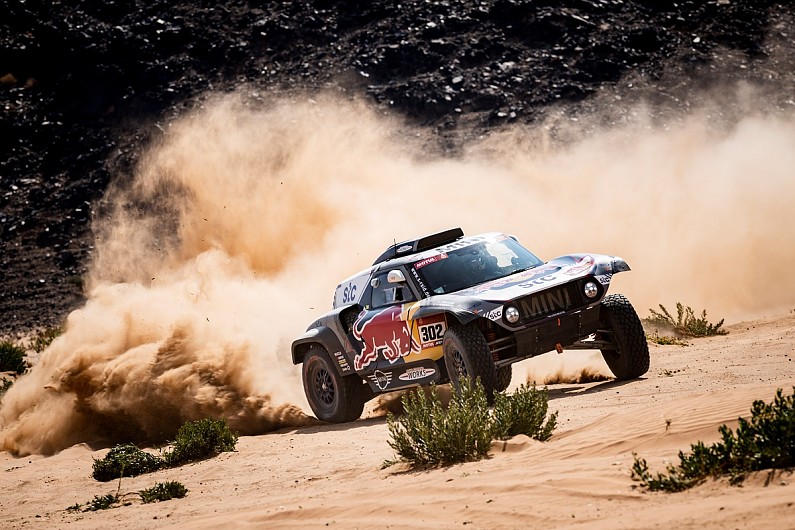 “Today it was really fast. We did 337 km of special stage in 2h36min10sec. The average speed is impressive.” Peterhansel said.

“Despite the idea of [ASO chief] David Castera to design a route that consistently breaks the pace to reduce the [top] speed, the truth is that the level of the competition is so high that the average speed is even higher than last year”.

“It becomes kind of dangerous when you push at the limit and today we were almost always at the limit.

“I can be happy because apart from a small navigation error near the finish, I don’t think I could have attacked much more. To stay in concentration for more than two hours in a row, we had to go all out.

“So far, so good, as we aren’t making too many mistakes. In the old times, 50% of all contenders would be knocked out for the race by driving mistakes or technical issues, but nowadays it’s become far less common, so you just…”

Despite not winning a stage after the first four full days of running, Peterhansel continues to lead the Dakar Rally by 3m58s over the Toyota from three-time champion Nasser Al-Attiyah, with the rest of the pack led by teammate Carlos Sainz more than 30 minutes behind.

However, the French driver shrugged off the criticism over not having won a stage yet, saying his 2007 success with Mitsubishi shows that the overall victory is more important than winning individual stages of the rally-raid.

“Winning stages is nice, but I am not worried about this,” he said. “What counts is to be on the top on the 15th of January in Jeddah. I have already won a Dakar without winning a stage.”