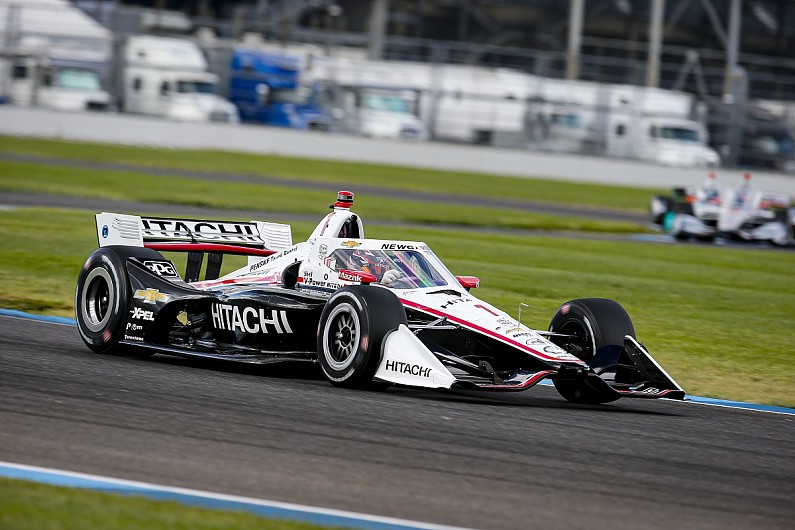 Newgarden, who started on the front-row alongside rookie polesitter Rinus VeeKay, ran in third place in the early stages as Ed Carpenter driver VeeKay and Harding Steinbrenner’s Colton Herta diced for the lead.

VeeKay then steadily increased his lead over the chasing Herta and Newgarden until lap 14 of 86 when the first round of green-flag pitstops were triggered, with Herta switching from black Firestones to the softer red tyres.

VeeKay responded three laps later, changing to blacks, but the powerful undercut allowed the two to race side-by-side through the opening segment of the 2.4-mile circuit with Herta slicing by the Dutchman at Turn 7 on lap 20 with a late switchback move.

This battle cost the duo time to Newgarden, who pitted his Penske-Chevrolet machine at the end of the 21st tour and emerged in the lead, with Herta bearing down on the #1 entry.

Three laps later, a bad exit onto the pit-straight from Newgarden allowed Herta to assume control of the race until the second round of pitstops came on lap 39.

Both Herta and VeeKay took on red tyres for the third stint of the race, while Newgarden once again waited for a handful of laps in clean air before responding with his own visit to pit-road, where he too took on a set another fresh set of red tyres.

Herta held a 4s gap to Newgarden in second once this cycle had shaken out, but the Penske driver had cut that to 1.9s by lap 49, and continued to reel the leader in.

After complaining of a lack of grip, Herta slid up the Turn 1 run-off road on Lap 61, handing Newgarden a lead he would never lose as the leading pair switched to a new set of black tyres on laps 61 and 62, respectively.

Newgarden was relatively untroubled after these stops and controlled the remainder of the race, with some 45 seconds of overtake boost in the bank, to take his third win of 2020, first at Indianapolis and slash Dixon’s lead from 73 points before qualifying to just 40 after a quiet race for the Chip Ganassi driver (below). 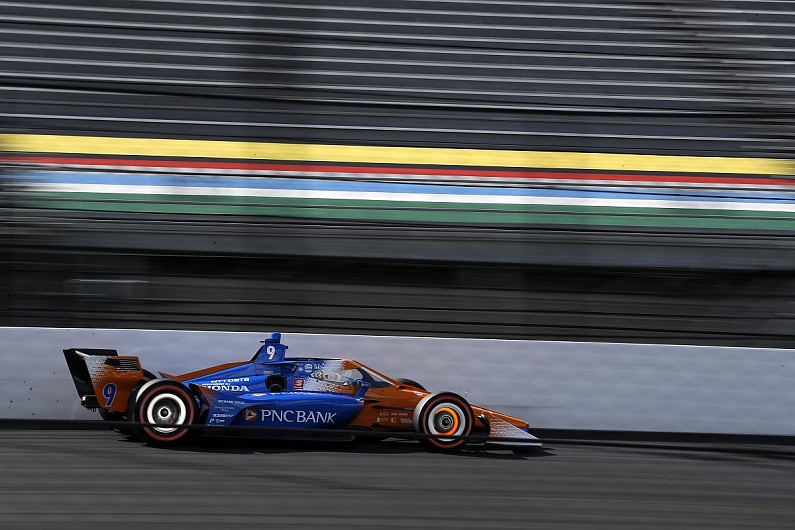 Herta struggled to keep pace with Newgarden after the final stops, and fell into the clutches of VeeKay, Alexander Rossi and Felix Rosenqvist as the attention switched to who would grab the final podium spots.

Rossi emerged from the final round of stops in sixth place in his Andretti Autosport machine, and quickly began to catch those ahead. At Turn 7 with a handful of laps to run, the 2016 Indianapolis 500 winner drove around the outside of Herta to take second place, albeit 14.9s behind the long gone Newgarden.

Herta slipped even further back to finish fourth as VeeKay passed the #88 at the start of lap 83 following a lock-up by Herta into the final chicane on the previous lap.

Felix Rosenqvist was the lead Ganassi finisher as the Swede employed a clever strategy of being among those first to pit on each stop cycle, and enjoying the benefit of the undercut.

Rosenqvist finished fifth ahead of Will Power (who suffered a slow pit-stop at the second stops) and Rahal Letterman Laningan Racing’s Graham Rahal, who banked a sixth top 10 result of the campaign.

Jack Harvey once again impressed for Meyer Shank Racing as he and Rahal pressurised Dixon into a mistake with two laps to go at Turn 7.

Dixon ran wide in the #9-Honda powered machine, struggling for grip and fell from seventh to ninth, and handing Newgarden a further eight-point swing in the championship battle.

James Hinchcliffe had a quiet afternoon in his first race since taking over the #26 Andretti from Zach Veach, coming home in 14th, while fellow in-coming drivers Helio Castroneves (Arrow McLaren SP) and Sebastien Bourdais (AJ Foyt) could only manage 20th and 21st respectively.